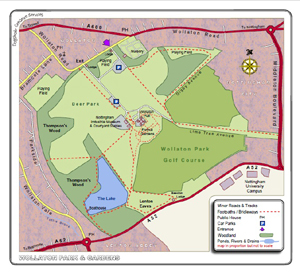 
Access: Wollaton Park is 3 miles to the west of the city centre and can be found by following the brown signs from the A52 or the A6514. From the M1 take junction 25 and follow the signs.

Parking: £2.00 per day and season tickets are available at a charge of £26 per year. Disabled Badge Holders are free (there is limited parking for blue badge holders outside the front entrance of the hall).

The park is open all year round from dawn until dusk, and has numerous footpaths with easy viewing of all the key habitats. Only small areas are restricted and are indicated by "conservation" signs, with this often being for your own safety as the resident deer can get quite angry! Parking is available at two on-site pay and display car parks (both accessible from the main entrance), although there is ample parking on nearby residential streets. If not using the on-site facilities, other parking can be found on Parkside, which allows quicker access to the lake and woodland areas. Several buses travel very close to the main entrance to the park with the main services being Trent Buses: no 22, and Nottingham City Transport: no's 31, and 28 running at about every 15 mins.


Habitat: Wollaton Park is situated around 5 miles from Nottingham City Centre and comprises woodland, a lake and open parkland and its relatively small size makes it easy to cover in a hour or two. The main focus of the site is the lake (and a small reedbed) along with the adjacent woodland where the vast majority of species are to be found. The lake overspill runs into a duck-decoy area surrounded by a damp woodland of Alder and Willow, whilst the main wooded area of Thompsons Wood is mature broadleaved. Smaller areas of Conifer are present, along with open grassland and tree lined avenues that are also of interest.


Birds: Although not known for its rarities or large numbers of birds; the site can offer excellent views of many of our commoner woodland birds and winter visitors. All the main woodland species are present with good numbers of Nuthatch, Treecreeper and all three woodpeckers. Of most interest are the Lesser Spotted Woodpeckers that regularly give good views throughout the winter months, usually among the roving tit flock. Summer brings the commoner warblers, including Reed Warbler by the lake along with all four hirundine species and the occasional Spotted Flycatcher.

Winter wildfowl on the lake includes Pochard, Gadwall and Wigeon , with Goosander often present in the new year and occasional Smew and Goldeneye. Winter visitors also include flocks of Siskin and Redpoll, often feeding by the lake along with Redwing and occasional Fieldfare.

As mentioned earlier, the site is not known for its rarities but it can throw up good birds for a site that is surrounded by urban development. For example, Hobbies are always a possibility in the summer due to the presence of large numbers of hirundines and indeed the current earliest record for the county is from this site. Bramblings can sometimes be seen during the harsher winter weather, often feeding on the Beechmast by the lake along with Chaffinches. Usually elusive birds such as Water Rail and Woodcock have been recorded from the site, with the latter on one occasion being flushed by a dog walker (they can have their uses!).

A full comprehensive site list and map can be found at the back of the leaflet "A Guide to the Birds of Wollaton Park" available from the main entrance to Wollaton Hall. The staff at the Hall will always be glad of any unusual sightings you may have.

Lesser Spotted Woodpecker provide the biggest attraction to this site, but as with any elusive species a large degree of luck is required and often a little patience too. Lesser Spotted Woodpeckers have been recorded across the site but are usually found along the tree lined avenues or in Thompsons Wood. In the case of the former, the birds are usually alone but the best chance of seeing them is within the wooded area along with other woodland species. During the winter months, the time of day is usually irrelevant but quieter periods will bring more opportunities as the birds are more likely to be feeding at the woodland edge. The footpath which circuits the lake is the most favourable, particularly the section between the three arch bridge and the reedbed.

Rose-ringed Parakeet has become a regular sighting from the Wollaton area, with small numbers regularly reported in the park.