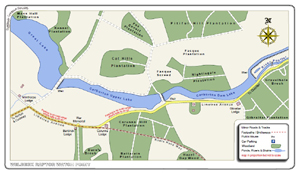 
Access: The watchpoint is situated along the minor road [Lime Tree Avenue] that runs between Carburton and Norton.

This can be accessed from the A614 by turning into Clumber Park and following the minor road [Lime Tree Avenue] S/W through the park heading towards Carburton village. At the B6034 cross-roads, head straight across towards Norton for approx 1.5 miles passing a monument on the right. Drive to the highest point of the road [approx SK 583 721] and park up sensibly on the grass verge.

View over the extensive woodlands to the north of the road, and under no circumstances venture onto the estate as the woods are strictly private and are heavily keepered.


Facilities: The Old School Tearoom, Carburton, S80 3BP is the nearest facilities to the watchpoint.


History: The naming of the Dukeries comes from four historic neighbouring Ducal estates, Welbeck, Clumber, Thoresby, and Worksop Manor. Depending on where you drew the line, the estates between them covered 88 thousand acres, giving the Dukeries at the time some of the qualities of a self-contained world. Welbeck has constantly evolved over the centuries – from a Premonstratensian Abbey founded in 1153, to a Cavalier residence in the 17th century; from English Gothic to the New Works of the nineteenth century with their mysterious labyrinth of tunnels. The MOD used many of the estate buildings as a Sixth Form College from 1954 to 2005.

Habitat: The Welbeck estate contains ancient woodlands and forestry; a beautiful chain of lakes; farmland and grazing; a deer park; and some of the country’s most important rural heritage buildings. At its heart lies the historic Welbeck Abbey and Welbeck Village.

Birds: Honey Buzzard and Goshawk are the main two reasons for birders to visit the watchpoint. For many years Honey Buzzard was the jewel in the crown of Nottinghamshire breeding birds with 1-2 well known pairs breeding in most years from the 1960s to 2001. Honey Buzzard is generally present from the third week in May to late August, returning to the Welbeck woodlands to breed each summer. They can be notoriously difficult to see, due to the fact that they spend long periods just sitting around in trees. Although often showing well, they are more often at long range as they soar and display over the woodlands, so be prepared for long periods of inactivity. In recent years they have proved less reliable with no retuning birds, as is the case at the time of writing.

Goshawk can be chanced on here at any time of year. The prime time to see displaying birds is from early March to April, when displaying pairs can be watched performing there acrobatic display over the woodlands. Again they can be notoriously difficult to see, but with Persistence can show very well.

In recent years Osprey have been frequent visitors in sping, sometimes staying for a number of weeks. Red Kite have been seen regularly, and good numbers of Common Buzzard are in the area.

Back along the road heading towards Caburton is a layby that is a reliable site for Marsh Tit, attracted by the seed feeding station put out by locals wanting to photograph the commoner woodland species. Also from this layby is a healthy breeding population of Mandarin Duck that can be found along this stretch of the lake. Goosander can also be found here in good numbers from November to March.

With abstracts taken from "The Status of Birds in Nottinghamshire" by Jason Reece.