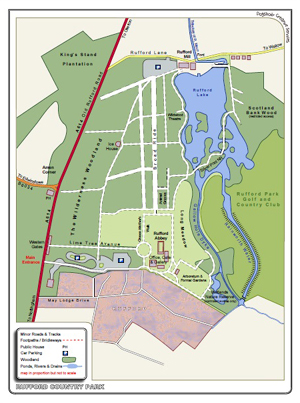 
Access: Two miles south of Ollerton and 17 miles north of Nottingham on the A614 Nottingham – Doncaster road.


Habitat: Situated in Sherwood Forest next to the A614 south of Ollerton, Rufford Abbey Country Park is a compact site with a variety of habitats - broad-leaved woodland, parkland and wetland.

Facilities: There are two car parks - the main car park off the A614 and the smaller Mill end car park, that is closer to the lake. Car parking charges sometimes apply. Both car parks are signposted on the A614. There are various circular paths around the site, which are signposted, making access easy (the woodland paths can get muddy). There are toilets and cafés in the Courtyard buildings and at Mill end.

It is a much used site at weekends and holiday periods, so early morning visits are recommended if you wish to avoid the crowds.


Birds: It is worth visiting all year around but is popular in winter because of small numbers of Hawfinches. The Hawfinches can be found perching in the tops of trees in Lime Tree Avenue next to the main car park. Early mornings from December through to March are best. They fly off to feed in the surrounding woodland, often favouring Yew trees, in which they can be hard to find. Other areas they favour are the isolated trees in the parkland next to Lime Tree Avenue and the woodland around the Old Icehouse.

Lime Tree Avenue has been a good site for Lesser Spotted Woodpeckers in the past, but in the last couple of winters they have been elusive with only infrequent sightings. The section of Lime Tree Avenue towards the old entrance gates by the A614 was a favoured area.

Typical woodland species of the Sherwood Forest area occur and Marsh Tit is reliable. In winter flocks of finches occur in the Alders around the lake, including Lesser Redpolls and Siskins.

The lake has common wildfowl in winter and attracts a dozen or so Goosanders. The weir and concrete shoreline at the Mill end are good places to look for Grey Wagtail.

In the summer, Swallows nest in the archways to the Courtyard.

A male Garganey over-wintered on the lake in early 2015. Firecrest sometimes occurs in winter and one of the more reliable areas is the Yew trees by the Old Icehouse. A Black Redstart has also occurred on and around the Abbey remains. Although popular in winter with birders probably under-watched other times of year. Always a chance of a raptor or Raven flying over, and vagrant wildfowl on the lake.