"Records of certain sensitive species will not appear here during the breeding season, unless publicised by site managers (but please submit your sightings anyway). Species that this generally applies to include (but are not necessarily limited to): Avocet, Bearded Tit, Bittern, Black-necked Grebe, Cetti's Warbler, Garganey. Goshawk (except from Welbeck Raptor Watchpoint), Honey-buzzard (except from Welbeck Raptor Watchpoint), Marsh Harrier, Mediterranean Gull, Nightingale, Peregrine (except for Nottingham City Centre), Raven, Red Kite (except wandering birds) and Woodlark (except from Budby Heath). For a range of other species, we will not include specific breeding information - this includes Barn Owl, Lesser Spotted Woodpecker, Little Ringed Plover, Nightjar, Turtle Dove and Willow Tit."

Girton Pits - Sedge Warbler [along the track near Sailing Club, this evening].

Attenborough Nature Reserve - Willow Warbler [on the Delta, 09:30]. Also Raven [over, this afternoon].

Ratcliffe on Soar - Red Kite [flew towards the power Station from the Long Eaton GP's, 17:00].

Gringley on the Hill - 5 Waxwing [briefly in trees near church this afternoon, then flew North].

Kings Mill Reservoir - Black-necked Grebe [on Cafe side of the reservoir, 10:30]. Also 20 Waxwing [briefly in the car park].

Clumber Park - 2 Blue-winged Teal [females, Clumber Lake 15:00, seen from the bank at the car park by the lake side just down from the bridge on south side of the lake. Observer Returned to check at 17:00 and one was there briefly before disappearing into bank side vegetation].

Barton in Fabis - 2 Green Sandpiper [Cottages Flash and a second on the A453 Balancing Pond, this afternoon].

Bilsthorpe - 13 Waxwing [on the Southwell Trail, this morning].

Barton in Fabis - Red Kite [mobbed by Raven, as it circled over the village, slowly drifting towards Gotham, 14:30], Curlew [flew upriver calling from Barton Island, 13:45] Also Green Sandpiper and 2 Common Redshank [A453 Balancing Pond this afternoon].

Awsworth - Red Kite [over this morning].

Holme Pierrepont - Cattle Egret [still present in field with up to 4 Little Egret, on the North side of the A52 Pit, viewable from Adbolton Lane, through hedge just west of Holme Grange House, 08:45 to 14:00 at least].

Southwell - 11 Waxwing [on the A612 opposite entrance to Palmers Court, feeding on cotoneaster this afternoon].

Holme Pierrepont - Cattle Egret [still present in field on the North side of the A52 Pit, viewable from Adbolton Lane, through hedge just west of Holme Grange House, early morning to 18:10, when it flew off to roost with 6 little egrets towards the river], Common Sandpiper, Dunlin, Little Ringed Plover, 8 Common Snipe, 4 Oystercatcher, 2 male White Wagtail, 20 Fieldfares and 2 Sand Martin through[Blotts Pit]. Also 50+ Goldeneye [including displaying males].

Holme Pierrepont - Cattle Egret [still present in field on the North side of the A52 Pit, viewable from Adbolton Lane, through hedge just west of Holme Grange House, 15:45 at least]. Also 2 Little Ringed Plover, Common Sandpiper, 2 Dunlin and Common Redshank [Blotts Pit] and 8+Sand Martin and 10+Little Egret [A52 Pit].

Kimberley - 5 Waxwing [still present in the area around Hardy street].

Burton Joyce - 15 Waxwing [opposite the Lord Nelson near the railway line, early afternoon].

Papplewick - Chiffchaff [by the Pumping Station].

Holme Pierrepont - Cattle Egret [again present in field on the North side of the A52 Pit, viewable from Adbolton Lane, through hedge just west of Holme Grange House, 07:57 - 15:20 at least]. Also Little Ringed Plover [Blotts Pit] and 4+Sand Martin [A52 Pit].

Cottam - Northern Wheatear and Chiffchaff [next to river Trent, behind Cottam Power Station].

Budby - 2 Mandarin - [flew over the middle of Budby Heath, heading for the pumping station].

Holme Pierrepont - Cattle Egret [in field on the North side of the A52 Pit, viewable from Adbolton Lane, through hedge just west of Holme Grange House 17:30 - 18:05, then flew North with Little Egrets].

Barton in Fabis - Green Sandpiper [Still present on the A453 Balancing Pond this morning to 16:30].

Holbeck - Black Redstart [in gardens at S80 3NG, then flew over houses and lost from view, late morning].

Kimberley - c30 Waxwing [still present on Cliff Boulevard, near the phone box and in tree on Hardy Street, this morning].

Barton in Fabis - 4 Whooper Swan [still feeding in rape field, viewable from the old A453, this morning]. Also Green Sandpiper [on the A453 Balancing Pond].

Rufford - 2 Chiffchaff [singing near the golf course this afternoon].

Kings Mill Reservoir - 27 Common Snipe and Chiffchaff. Also several Waxwing [again this morning, they seem to be coming into drink from the stream by the car-park, early morning].

Kimberley - 15 Waxwing [Cliff Boulevard near the red phone box, this morning. Apparently they have been present here for the last few days].

Netherfield Lagoons - Bittern [calling bird, circled the Deep Pit and Slurry Lagoon for several minutes at dusk, then flew off high to the East]. Also 3 Chiffchaff [singing this afternoon].

Girton Pits - Greater Scaup [female, on A1133 Pit this afternoon].

Skegby Trail - Raven [over "cronking" early morning] and Mandarin [over the trail].

Clifton Grove - Chiffchaff [singing on river path, near to the Grove entrance, 07:55].

Netherfield Lagoons - Chiffchaff [singing from the power line along the Lower Path' this morning] and Jack Snipe [still present on the Wader Scrape].

Attenborough Nature Reserve - 16 Waxwing [between 8 and 16, still present between the Cricket Pitch and Tween Pond Strand entrance, 07:26 to 12:00 at least].

Attenborough Nature Reserve - Hen Harrier [Ringtail, over the Strand mobbed by corvids, then lost from view behind trees, 10:00], 16 Waxwing [Still between the Cricket Pitch and Tween Pond Strand entrance, showing well 07:25 to 16:15 at least] and Sand Martin [over the Visitor Centre garden this morning].

Ratcliffe on Soar - Peregrine [over Parkway towards the power station, 14:30].

Warsop - c12 Waxwing [in hedge bordering Peafield Lane at the top near the double roundabouts, 12.50].

Attenborough Nature Reserve - 6 Cetti's Warbler [singing at various point], 2 Chiffchaff [one in NE corner and another in car park] and singing Blackcap.

Mansfield - Willow Tit [singing next to 14th green of Mansfield Golf Course in birch woodland next to Eakring Road] and Raven [mobbing a kestrel, then flying south across Mansfield Golf Club Course towards Ratcher Hill Quarry].

Calverton - 12 Waxwing on our television aerials, this morning].

Wollaton Park - Blackcap [in trees near golf club, this morning] and 5 Redpoll [in alders by Wollaton Lake].

Hoveringham - 5 White-fronted Geese and 4 Pink footed Geese [on pools by the Sailing lake] and 3 Brambling [still on feeders].

Wollaton Park - Rose-ringed Parakeet [mobbing a Grey Heron this morning, chasing it from the hall to the lake].

Lenton - Black Redstart [female type, University of Nottingham campus working along east side of Centre for Biomolecular Sciences adjacent to Clifton Boulevard A52, 16:54].

Hoveringham - Red-breasted Merganser [1w drk, still on the Railway Lake, with a pair of Goosander]. Also 3 Shelduck [through to west] and 3 small parties of Siskin.

Netherfield Lagoons - Chiffchaff [along the Ouse Dyke, this morning] and 4 Stonechat [together in front of the sub-station]. 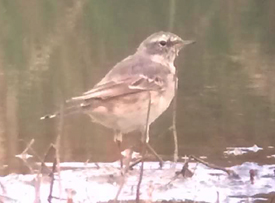 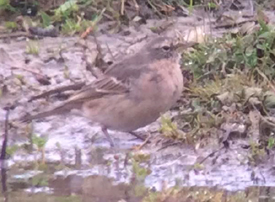 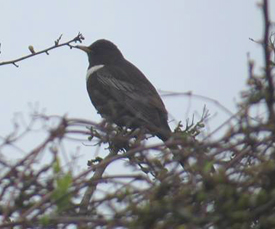 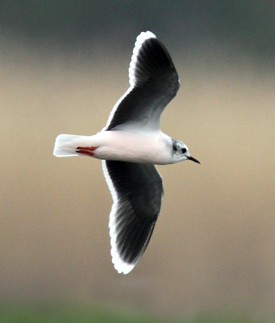 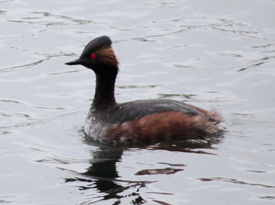 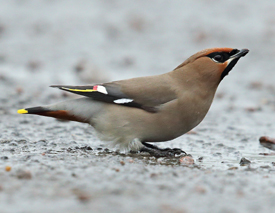 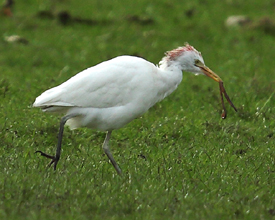 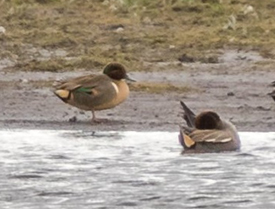 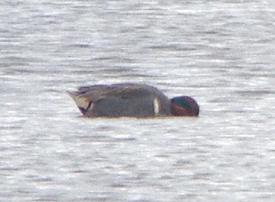 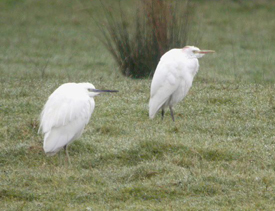 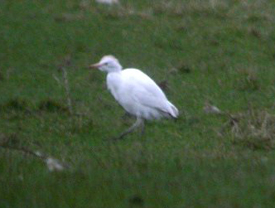 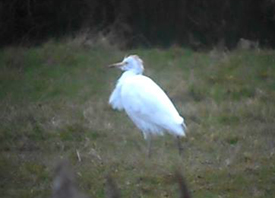 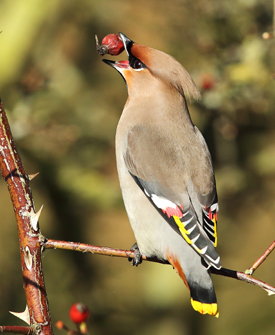 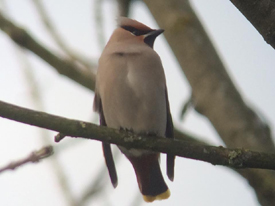 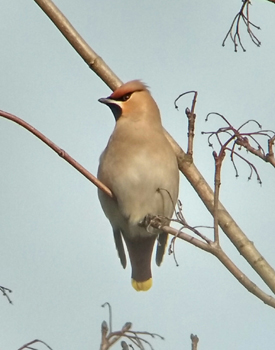 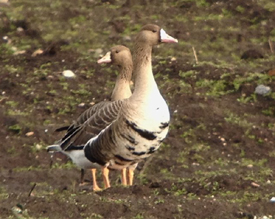 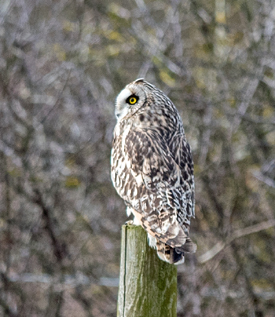