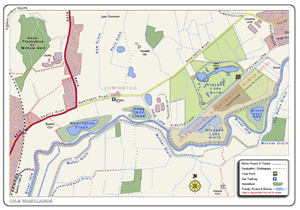 
Newington Flash: Park at the Ship Inn at Newington and view from the flood bank. Although the flash itself is in South Yorkshire, it can be viewed from the Nottinghamshire border and birds move freely between here and Hagg Lane Flash. As well as Hagg Lane (see below), this area is very good for Waders, with both Temminck’s Stint and Pectoral Sandpiper recorded in 2015. In winter, large numbers of Wigeon and Teal are present. SK663937


Hagg Lane Flash: The Flash is just South East of Newington. Access to Hagg Lane is off Newington Road about 200yds east of the Ship Inn. There is a pull-in around 150yds down the Hagg lane were the Flash can be viewed from the East side. The area is a low lying field which floods regularly throughout the year as the water levels rise and fall on the River Idle. The Flash is particularly good for Waders during the spring and autumn passage, depending on the water levels, with Ringed Plover, Little Ringed Plover, Dunlin, Green Sandpiper and Ruff usually present and over the last few years, Little Stint, Curlew Sandpiper, Pectoral Sandpiper, Wood Sandpiper and Spotted Redshank have been recorded here almost annually. From mid-summer, good numbers of Little Egret can be seen along with the occasional Great White Egret and, in 2014, a Glossy Ibis stayed for several weeks. In winter, large numbers of Wigeon and Teal gather along the Washlands, along with the a few Pintail. There are also good numbers of Redshank at this time. In April 2009 up to 5 Water Pipits were present for several days. SK670938


Slaynes Lane: The bridleway is accessed from either the end of Hagg Lane in Newington or off West Street in Misson. Along Slaynes lane is an area of farm land and extensive sand quarry workings. There are plans to turn these workings in to marshland and wet meadows, hopefully in the not too distant future. These plans have already been partially implemented on the north side of the lane. Winter is a good time for raptors, with Marsh Harrier, Hen Harrier, Merlin and Short-eared Owl all seen recently hunting along the lane. Little Owls can sometimes be present in the Willows at the Misson end along with the occasional Barn Owl over the grassland. Stonechats can also be seen wintering in this area, especially on the restoration pit on the north side of the lane. Winchats can also be present in this area during autumn. In summer, Hobby, Turtle Dove and Corn Bunting may be seen. Other scarce birds recorded in this area in recent years are White-fronted Goose, Garganey, Curlew Sandpiper, Pectoral Sandpiper, Spotted Redshank, Wood Sandpiper, Ring Ouzel and, in 2002, a Grey Phalarope spent several days on the new workings. SK682942

The Past and the future: This is an extract from the 1988 - Birds of the Doncaster district by RJ Rhodes about the area – “Old shooting records of White Stork, Bewick’s Swan and Lesser Yellowlegs give a hint of the calibre of the area in the past. In the two decades to 1980 the winter floods served as a major refuge for large numbers of waterfowl, in particular Bewick’s Swan, Wigeon, Teal and Mallard. Waders like Golden Plover, Lapwing and Snipe occurred regularly in impressive gatherings, with Dunlin and Redshank in smaller but significant numbers. At times a Hen Harrier, Merlin, or Short-eared Owl hunted the valley. When flooding persisted or reoccurred beyond the winter months the waters invariably many passage migrants of which Ducks, Gulls, Waders, and Hirundines were the most numerous. More unusual visitors to the valley include Red-necked Grebe, Osprey, Richards Pipit, and Lapland Bunting. During the 20 years to 1980, 78 species are known to have bred and a further 6 may have done so. It is truly regrettable during the present decade; increased drainage efficiency has greatly has greatly diminished the ornithological significance of the area”. Hopefully with Hanson’s Restoration plans for Slaynes lane and with the increased involvement of the Nottinghamshire Wildlife Trust, along with careful water level management, this part of the Valley can be restored to its former glory.