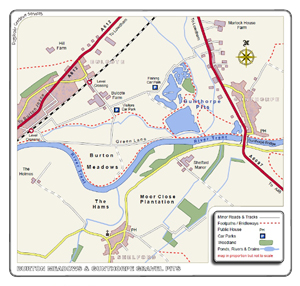 
Access: Car parking is possible on Meadow Lane, Burton Joyce near the village hall, or, at Bulcote Farm in either the visitor's car park, or the fisherman's car park. Alternatively you can park adjacent to the Unicorn public house in Gunthorpe village.

Habitat: River Trent banks and adjacent farmland, old gravel workings with a few small patches of woodland. Many footpaths cross the area including a riverside path on the north bank of the Trent and various paths around the pits.

Birds: Winter - the abundance of water makes the area good for wildfowl with good numbers of Wigeon, Goldeneye, Teal and other winter wildfowl species including seaduck and sawbils. The pit margins are not particularly suitable for wading birds but Snipe are regularly found in the wetter areas and Redshank along the river banks with one or two Green Sandpipers on any flood water. The larger fields regularly contain Lapwing, Golden Plover, Redwing and Fieldfare. Little Owl can often be seen along Green lane.

Spring - the bushes around Gunthorpe and the hedgerows around the gravel pits are excellent places to find summer visitors such as Willow Warbler, Whitethroat, Lesser Whitethroat and Garden Warbler. Suitable habitats in the pit margins will produce Sedge and Reed Warbler. Almost annual is Grasshopper Warbler, which favours the rough areas between the pits. Yellow Wagtail are regular along the field edges while Wheatear and Whinchat are frequent passage migrants and best looked for on the relatively undisturbed Shelford river bank. The main pits will provide good numbers of hirundines and Swifts with small numbers of Common Terns present. The river banks regularly contain Oystercatcher and Redshank with Common Sandpiper on the Water's edge.

Summer - in addition to the usual breeding warblers and hedgerow species, Common Tern can be found fishing along the river and Hobby is regular, usually seen hunting hirundines.

Autumn - the bushes and hedgerows are good places for passerine migration, with Whinchat, Common Redstart and a number of Warbler species. In recent years Black Tern, Little Tern and Little Gull have all been seen on return passage.


General: In the late nineties Severn-Trent Water Authority replanted seven miles of hedgerow which has benefited several species including Yellowhammer and Tree Sparrow. Great Crested Grebe, Cormorant, Canada Goose and Tufted Duck can be found throughout the year.

A feature of the area is that after a wet winter many flooded pools can appear often remaining into the spring. These are excellent places to look for common and migrant waders.


Butterflies: The bushes near Gunthorpe, the fields between the pits and the river bank are all good areas to look for butterflies. A total of 21 species were seen in 1996. Good April weather and more coverage resulted in earlier recording dates than in 1995 for some species. This was followed by two cold weeks in the middle of May which resulted in later emergence dates for the browns and skippers. Good weather in July and August, together with regular rainfall, resulted in an excellent summer for butterflies at Gunthorpe and Burton Meadows. One of the main feature of 1996 was the enormous numbers of Painted Ladies arriving on the south coast on May 30th. Gunthorpe pits noted the first individuals on May 31st with a maximum count of 43 on June 13th and three egg laying on June 15th. The second generation produced a maximum count of 81 on August 15th. Another migrant species, the Clouded Yellow, also had a very good year with the first noted in the area on August 13th. The Holly Blue is a butterfly which has regular cycles of good and bad years. It is regularly seen in Bulcote village and in 1996 numbers began to recover with frequent sightings from May 7th. The first for Gunthorpe pits was noted on August 15th.