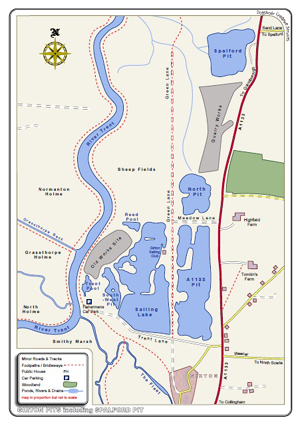 
Introduction: Girton Pits are perhaps most famous for hosting a Great Snipe in late August and early September 1989, which occupied a nettle bed next to the Trent (so I've been told); more recently, a White-winged Black Tern was found here in July 2004, the ninth record for the county.


Access: The site lies just north of Girton village, to the west of the A1133, from which the site can be accessed - either along Trent Lane at the southern end (which is surfaced for part of its length before turning into a bumpy track), or along Meadow Lane at the northern end (which is a track). The site is bisected by Green Lane, a track which runs north from Trent Lane (past Girton Sailing Club), meeting with Meadow Lane (and continuing for some way further north, beyond the pit complex). There are four main parts to Girton Pits - the A1133 Pit, the Sailing Lake, North Pit, and Spalford Pit which lies a short distance to the north. There are a number of smaller pits as well, but none of these are particularly easy to access.


The A1133 Pit is best scanned from its southern end through the hedge on Trent Lane, although it is possible to view sections from along Green Lane. This pit is fairly good for diving ducks, and held a Ferruginous Duck in January 2009 and a Great Northern Diver over the winter 2015-16.


The Sailing Lake is the most productive pit in the complex, but can only really be viewed from its southern boundary from Trent Lane. The western part of the pit (behind the main island) is mainly obscured from view - and this tends to be where a lot of the birds hang out - especially when sailing is taking place, which can cause disturbance (with birds also shifting to the A1133 Pit). The best birds of the last few years include Green-winged Teal (January 2006), a couple of Great Northern Divers. It has also hosted Common Scoters, Smew, Eurasian White-fronted Geese, and can be attractive to Black and Arctic Terns in the right conditions.


To the north of the A1133 Pit is North Pit, best viewed from the gate at the eastern end of Meadow Lane. This pit attracts the occasional wader, and can have good numbers of duck, including scarcities like Smew and Scaup.


The remaining pits are all small in size, and there is no public access to view them, but several other parts of the site can be worth checking; from the Fishermans' Carpark at the end of Trent Lane, the River Trent itself can be productive, and scanning the holmes beyond on the opposite side of the Trent can produce geese in the winter, with Pink-footed Goose recorded fairly frequently and Eurasian White-fronted Goose on occasion. To the south, Smithy Marsh is often fairly birdless, but can hold big numbers or Lapwing and Golden Plover when conditions are wet. There is a path that heads north from the carpark along the Trent, allowing view s over the former stocking yard; although abused by off-road bikers, Sand Martins nest in a large pile of sand here, and in adjacent banks on the Trent. Heading back east from the carpark, an area of scrub by the south-west corner of the Sailing Lake is good for warblers and Turtle Dove, although Willow Tits which formerly bred here seem to be lost. The Sheepfields to the north of the Sailing Lake can be worth a look in autumn for things like Whinchat. The old works site has a sand martin colony,


Finally, Spalford Pit lies a short drive north of the main pit complex. This pit can be viewed from the quarry entrance, which is a ramp on the west side of the A1133 (just south of he junction of Sand Lane which leads east off the A1133 into Spalford village). This pit can be interesting, and most recently a Ferruginous Duck occupied this site at the end of December 2012 whilst a female Ring-necked Duck was recorded here in mid-November 2014. It can also be productive for gulls (including Yellow-legged and Caspian) at times, which come to wash and loaf from the nearby Spalford pig fields.