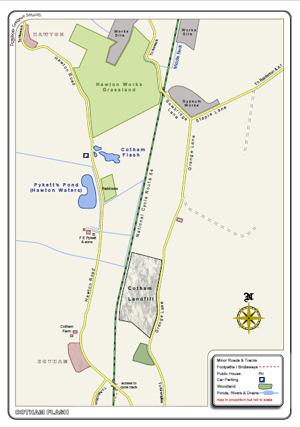 Cotham Flash is a small wetland area to the south of Newark, formed just over a decade ago on an area of mining subsidence (the area was previously opencast mined for gypsum). The site can be 'unofficially' accessed through a gap in the hedge off the Hawton to Cotham road (with parking available opposite in the carpark at the northern end of Pykett's Pond – although this is currently closed). There is one main pool (furthest from the road), around which vegetation has become well established with a small reedbed and several young willows. There are two small pools closer to the road, now largely choked with rushes and Typha, with more willow establishing. An area of rough grassland surrounds the whole lot.

For such a small site, it has a good track record, pulling in migrant passerines such as Whinchat and a wide selection of waders and wildfowl (most notably American Wigeon) - however, the site has probably passed its best for these now it is so well vegetated. Regular breeding birds include Reed Warbler, Reed Bunting, Grasshopper Warbler and Lapwing, whilst to the immediate south is an area of horse paddocks which can be attractive for Yellow Wagtail and Wheatear on passage. Temporary pools which sometimes appear in the field next to Cotham Flash can attract loafing gulls in the winter.

To the north of Cotham Flash is Hawton Works Grassland. There is no official public access onto this site, but it can be viewed from the Sustrans Route (National Cycleroute 64) which runs south from Newark on a disused railway line - this itself can be accessed off Bowbridge Lane (with parking outside the gypsum works). These grasslands are alive with Skylarks and Meadow Pipits in the summer, and often support Grasshopper Warblers. Barn and Little Owl breed, and Short-eared Owl is a good bet in the winter (the latter also visiting Cotham Flash), as is Stonechat and Snipe. It supports good numbers of Grey Partridge all year round.

Pykett's Pond (officially known as Hawton Waters) is a restored area of gypsum workings, west of the Hawton to Cotham road, opposite Cotham Flash. The site is private, and now used as a fishing lake with patches of fringing reed. It has hosted wintering Bittern, and is used by bathing gulls from Cotham Landfill. It sometimes draws in other notable birds (e.g. Smew). Parking is available in the carpark at the northern end of the pond.

Cotham Landfill is an active landfill site to the south-east of Cotham Flash, on Grange Lane. It used to be possible to see into the landfill from the road, but this is no longer the case, and the only place to view the site from now is the Sustrans Route (National Cycleroute 64) which runs up its western side. Access to the cycleroute is via the ramp at its southern end, with parking on the verges on the road just south of Cotham village. The landfill is active on weekdays and normally on Saturday mornings, but looking east into the sun can make viewing tricky during the morning.

The obvious draw at this site is wintering gulls; it normally attracts Iceland and Glaucous Gulls (the latter more frequent than the former), as well as Caspian, Yellow-legged Gulls and occasionally Mediterranean Gull. Unfortunately, the gulls do not always play ball. If not on the landfill itself, these sometimes gather in the field on the east side of Grange Lane, opposite side of the road to the landfill entrance; it's not easy to stop safely on Grange Lane and the gulls are always very jumpy.  The gulls also head to Pykett's Pond or to Kilvington Lakes to bathe, or to temporary pools in the field next to Cotham Flash if present, whilst they roost at Hoveringham Lakes.