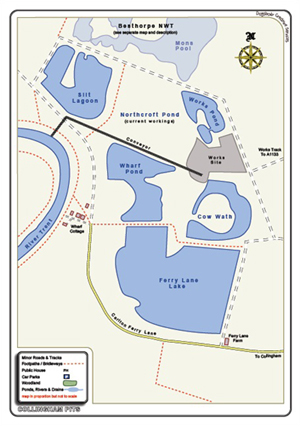 
Access: Collingham Pits are a series of active and partially restored sand and gravel pits, located north of Newark, between the village of Collingham and the River Trent. The site is accessed off Low Street in Collingham via Carlton Ferry Lane (which is actually signed ‘Trent Lane’ on the ground). After about a kilometer, the first pit that is reached is Ferry Lane Lake, which can be viewed from two spots along the road (a single gate on the southern side, and a double gate in the south-western corner). It can also be viewed from a footpath that runs along its northern side.


Ferry Lane Lake became a lake in 2014 following flooding and has remained full ever since, although there remains some unquarried sand in the centre which may mean that the water gets pumped down in the future to access it. When water levels were lower (especially at the end of the summer), these workings were attractive to waders, pulling in species such as Temminck’s and Little Stints, Wood, Curlew and Pectoral Sandpipers and Spotted Redshank. However, the star bird was not a wader, but a passerine; Nottinghamshire’s first Pied Wheatear turned up here in November 2013.


Since the pit flooded, it has lost much of its wader interest, although muddy fringes on the western bank can still be attractive to the odd wader such as Ruff and Green Sandpiper. Of course, it has become of more interest for wildfowl and other wetland species, and since 2014 has attracted Great Northern Diver, Scaup, Common Scoter and Smew. Reasonable numbers of wildfowl – particularly Wigeon and Tufted Duck - can build up in the winter (and are always worth checking for something rarer), along with Goldeneye and sometimes Goosander; Green-winged Teal occurred before the pits flooded, and Garganey will sometimes put in an appearance either side of the summer. The fields to the west of the pit can hold herds of swans in the winter, depending on the crop, which are always worth a scan for Whooper Swan. These fields, and the others around the site, retain a good selection of farmland birds, including Yellowhammer, Linnet, Skylark, Grey Partridge, and occasionally Tree Sparrow.

The breeding bird community is relatively poor currently, but includes Coot, Great Crested Grebe and Sand Martin, whilst shallow pools which sometimes form on the western side of the pit, viewable by looking north from the double gate, have hosted breeding Lapwing and Redshank in the past. Large numbers of hirundines and Swifts can congregate in poor weather conditions in the spring and at this time the grassland on the western side of the side, now closely grazed by horses, and can be attractive to Yellow Wagtails. It was here also that a Glossy Ibis took up residence for several days in 2014 and more recently, a Water Pipit in March 2016. Arctic and Black Terns can occur in suitable conditions, and Little Gull and Kittiwake have been recorded on occasion; a reasonably-sized gull roost has started to form in the autumn, predominantly Lesser Black-backs, but with Yellow-legs and the odd Caspian too.

Two pits lie immediately to the north of Ferry Lane Lake. Wharf Pond has two sections, to the north and south, and can be viewed from adjacent footpaths. This pit rarely has much of note, but the northern part is quite shallow and can be good for waders if water levels have dropped sufficiently at the end of the summer, whilst the southern part has held Red-necked Grebe in the past. Cow-wath (so-named after a pond which used to exist here) also rarely holds much of note, and is difficult to view. To the north of Cow-wath and the quarry yard is the Works Pit, which can be partially viewed from Northcroft Lane, but again, this again rarely holds anything of great note. However, this can be a good place to listen for Turtle Dove.


Further along Ferry Lane, the Silt Lagoon is reached on the right hand side, which can be viewed from a gap in the hedge on the lane (which by now has become a track), or from Northcroft Lane on the north side. This supports a silty delta on its eastern side, the size of which depends on water levels, but can be good for loafing gulls (including Yellow-legged later in the summer) and passage waders such as Little Ringed Plover, Avocet and Whimbrel. Curlews favour the grassland peninsular that bisects the pit during the winter and early spring (which can also be worth checking for Wheatear at the appropriate time), whilst small numbers of diving duck are resident during the winter and Shelduck breed here. The patch of reeds next to the delta is the largest area of reed on the site, and supports breeding Reed Warbler, the occasional Water Rail, and is a good place to scan for Snipe when water levels are low.


To the east of the Silt Lagoon is the ‘new workings’, properly named Northcoft Pond. This pit is currently under excavation (at the time of writing), and cannot be seen from public rights of way. Northcroft Lane, a track which runs along the northern side of the Silt Lagoon and Northcroft Pond, before turning south-east past the quarry yard entrance, is bordered by mature hedges and ash trees. The lane is particularly good for breeding warblers and Bullfinch. It is also worth walking in spring and autumn for Redstart and Spotted Flycatcher, which sometimes occur. This is also still a good spot for Turtle Dove.