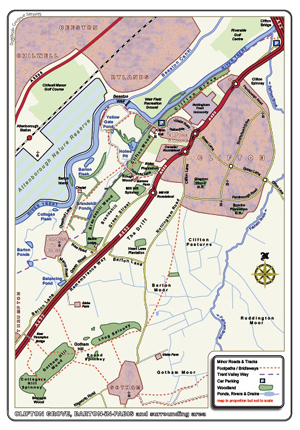 
Access: There are two car parks that can be used to access the area. The main car park is in Clifton Village and is accessed by turning off the A453 onto Village Road. Follow the road through the Clifton village and turn right onto Holgate and the car park is situated on the right at the far end of Clifton village. Clifton Grove, Clifton Wood and Barton in Fabis can all be accessed from this car park. Parking is free and there are signs and an information board to show you where to go.

A second car park can be found opposite the BP Petrol Station on the B679 Clifton Lane. From here walk over the small footbridge that crosses the Fairham Brook and follow the "Trent Valley Way" towards Clifton Grove.

Parking for Clifton Pastures is avalible by useing the layby on the Nottingham Road/Barton Lane junction or by accessing the site from the top end of the Clifton estate.


History: The area has lots of history – much of which can still be seen today. The woods were originally used as a grand back garden for the Clifton family in the 17th and 18th century and sits by their old house, Clifton Hall. Clifton Grove still has some of the ornamental planting that you would have seen if you’d visited in the 18th century. The remains of a fountain and a shooting lodge dating back to the 18th century can be seen in Clifton Wood. You can also see the remains of a pump house and the ‘Witches Steps’, a flight of steps leading to the former site of Colonel Clifton’s Pool.

Habitat: All three Trent Valley sites, Clifton Grove, Barton in Fabis and Thrumpton lie back to back along the banks of the river Trent that boast a wide range of diverse habitats.

The River Trent is the most important factor in the area, as it is a well know route for migrating birds.

Clifton Grove and Barton in Fabis both hold the areas main woodland habitat, namely the Grove, Clifton Wood and Branshill Wood, with all three woodlands acting as a wildlife corridor.

The Grove is 17.3 hectares in size and is situated on a steep escarpment that runs alongside the river Trent. At the top of the escarpment is a footpath that runs through an avenue of trees, the footpath leads down to the base of the escarpment and along the side of the river, this footpath forms part of the Trent Valley Way. The steep cliff of the Grove supports mixed deciduous woodland. An excellent area for the commoner woodland species and with a bit of luck all three woodpeckers can be found in this area although Lesser-Spotted Woodpecker has become very scarce in recent years.

Clifton Wood is large and diverse woodland of 12.1 hectares, that runs at the back of Clifton Hall. The south of the woodland is mainly beech, lime and larch, whilst large oaks and sycamore dominate the northern end of the woods. 18th century planting is still in evidence with several Giant Redwoods, native to North America. An early spring visit will see the woodland habitat at its best, as the woodland floor turns blue, covered in native bluebells. This deciduous woodland holds most of the common species of woodland birds and as with the grove all three Woodpeckers can be seen. Additional interest is provided along the eastern edge of the site where broad-leaved woodland has developed on a steep slope derived from strata of the Thassic Keuper Marl. Here rock exposures show very well the formation of gypsum bands and lenses within the marl sediments.

The Rough Wood is a small woodland copse situated along the footpath between Clifton Woods and Branshill Wood. This small copse has many dead trees that in turn attract Woodpeckers. Below the wood is a hedgerow that runs from the edge of the Rough Wood to the entrance of Branshill Wood, acting as a corridor between the two woodlands. The hedgerow can produce any number of passerine migrants with Spotted Flycatcher, Tree Pipit, Whinchat, Ring Ouzel and good numbers of Warbler species all annual.

Branshill wood is mixed deciduous woodland with a large area of conifers that until March 2007 held a large heronry. The heronry was one of the largest in Nottingham with about 40+ pairs breeding from February onwards. In March 2007 the Heronry was deserted due to constant pressure from the increasing numbers of Common Buzzard. This woodland has produced a number of birds of prey with Goshawk, Hen Harrier, Marsh Harrier, Osprey, Red Kite, Peregrine and Hobby all recorded in the vicinity of this woodland.

Branshill is the highest point in the area, a steep hillside of pastureland situated between Branshill Wood and the Rough Wood. Visible Migration watches in both Spring and Autumn can be very rewarding, with good counts of migrants passing through the area. Ring Ouzel has been an annual occurrence here since 2008, usually turning up in the third week of April, although they seldom stay for more than a few days. This site also boasts the only record of Montagu's Harrier.


The area also has several ponds and flashes; all are of great important from a birding perspective.

Holme Pit SSSI (also known as Colonel Clifton’s Pond). The site contains some of the best remaining areas of marsh; reedswamp and open water in Nottinghamshire and is of Regional importance. The adjacent areas of marsh provide a valuable habitat for a variety of passage, wintering and breeding bird species, while the reedbeds are a valuable bird roosting area. In winter Bittern is a regular occurrence as is the loud squealing of a water rail. Butterflies and dragonflies are a common sight amongst the flowers and rushes bordering the Pit and frogs use the shallows to spawn every spring.

Branshill Ponds consist of two small ponds split by the floodbank below Branshill Wood. An excellent place to see Hobby in the summer months, as they hawk Dragonfly's from over the ponds. The larger of the two Ponds attracts small numbers of wildfowl that includes my first record of Garganey present in September 2007. The more common species recorded here are Gadwall, Eurasian Teal and Northern Shoveler. Little Grebe is resident on the largest pond but can be very elusive. Water Rail has yet to be seen in this area but it must be there somewhere.

Barton Flash a large natural flash that in the late nineties attracted some excellent numbers of wildfowl and waders, but has now been suffocated by encroaching willows that have now taken over most of the site. The site still attracts small numbers wildfowl of mainly Common Teal and Shoveler. Common Snipe still find the the site attractive and can be found in good numbers at certain times of the year.

Cottages Flash is situated just a few metres from the banks of the River Trent, and is viewable from both sides of the river. This natural flash is without doubt my favourite location within the area. The potential of this site is endless, having already attracted 22 different species of wader, Great White Egret, Red-rumped Swallow and Ring-billed Gull. The fields that surround the flash are regularly grazed by Cattle or Sheep, and attract a number of passerines in spring and autumn including annual Wheatear, Whinchat and Yellow Wagtail.

Barton Village Ponds are situated on the west side of the village. Attractive to a number of common wildfowl and the odd wader, although has yet to produce anything out of the ordinary.

A453 Balancing Pond is a new addition to the area, constructed with the widening of the A453 in 2015. This new site has already produced a number of interesting species including Blue-headed Wagtail, Channel Wagtail, 8 species of wader and Short-eared Owl. Corn Bunting have also found this area attractive, with regular sightings throughout spring 2016.


Other habitat here in the trent valley region is mainly pasture; wet marsh and agricultural land that are crisscrossed by many water filled ditches and dykes.

Away from the river are Clifton Pastures and Barton Moor. This flat low-lying topography comprising approximately 550 acres of farmland. The Fairham Brook runs across its whole length with a network of drainage ditches criss-crossing the land. With the absence of farmsteads or other buildings the area incorporates a relatively uninhabited and inaccessible character. With very few hedgerows or trees this looks a very barren bird-less area, but this isn't the case. In fact most of the scarcer farmland species that are declining elsewhere are still found in this area. This is one of two core areas in the county for Corn Bunting, although with two recent major construction projects nearby Corn Bunting numbers have suffered severely. Other notable species recorded here are Hen Harrier, Marsh Harrier, Merlin, Quail and large flocks of Golden Plover to name a few.


Birds: have been recorded on a regular basis since 1995 and boasts a list of 203 species.

Winter – Birding here in winter can produce a number of scarce visitors. Holme Pit is always worth checking out for Bittern, as it has been almost an annual occurrence since 2007, the reed-beds also hold a number of Water Rail.

Hawfinch is always possible in the Alder Plantation, having been recorded here on two separate occasions. More likely species to be seen here are Siskin, Lesser Redpoll and Brambling

The large open fields are always worth checking out for Winter Swans that drop in to join the large herd of Mute Swans that gather each winter feeding on various winter crops.

The fields towards Thrumpton have a reputation of attracting good numbers of wild Geese with White-fronted, Pink-footed and Bean Goose all recorded within the winter period. This same area is also a reliable location to see Merlin as they hunt the various finch/Bunting flocks. Hen Harrier and Short-eared Owl are also very possible on any large open areas such as Clifton Pastures/Branshill Moor.

Wintering flocks of Corn Bunting are always looked for throughout the winter with the largest flock recorded being 142 in February 2009. Numbers since have declined massively with only double figure counts in recent years.

Wildfowl counts are relatively small due to no large areas of open water, although in extreme winters when all surrounding gravel pits freeze over the river Trent can be very productive, with Red-brested Merganser, Smew and large numbers of commoner wildfowl all possible.

Spring - The spring passage is without doubt my favourite time of the year in the area, that can always produce something special.

Parties of passage Terns and Little Gull can pass through in large numbers if the weather conditions are favourable. Two dates that will live in the memory are 25th April 2012, producing 14 Little Gull, c40 Arctic Tern, 3 Black Tern and Whiskerd Tern all through Thrumpton and 2nd April 2016, when 28 Sandwich Tern flew S/W through Cottages Flash, further birds passed through over the river on the Attenborough Nature Reserve with a combined total of c45 inderviduals.

Passerine migrants are well supported with good numbers of Warbler species, Tree Pipit, Common Redstart, Whinchat, Northern Wheatear and Spotted Flycatcher all recorded in this period. The key area to focus on for passerines is the hedgerow between The Rough Wood and Branshill Wood that acts as a funnel, for migrants.

September is also a good month to chance upon a Hen Harrier and Marsh Harrier that have been recorded several times in the area.

Late August to early September can also see a boost in Hobby numbers in the area, with up to 7 birds hawking Dragonfly's over Branshill Wood.