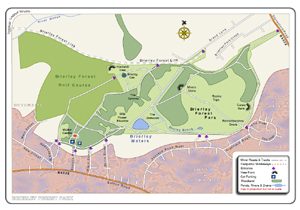 
Introduction: Brierley Forest Park was developed as a Country Park between 1992 and 2000, to provide footpath, cycling and horse riding networks through a series of plantation woodlands, hay meadows, water bodies, streams and wetland areas. An accessible circular route is provided from the visitor centre to Brierley Waters, the main pond within the park. Originally the site of Sutton Colliery, the park has been transformed into a valuable wildlife haven with nature walks covering over two miles. The Park also provides recreation facilities such as a football pitch, children's play area, a sculpture trail, visitor centre and angling facilities. The centre offers refreshments, exhibitions and information and is run by volunteers through the Brierley Forest Park Trust. The park takes its name from the colliery, known locally as Brierley Pit, after the Staffordshire miners who came from the area of Brierley Hill to sink the pit in the early 1870s. An imposing reclaimed spoil heap known as Rooley Tops occupies most of the eastern and central parts of the site with an intervening patchwork of long-established fields with mature hedgerows. A wide variety of wildlife now flourishes, within the varied habitats, amongst which are four SINCS sites (Sites of interest for Nature Conservation). A large population of skylarks nest on the spoil tip and other residents include foxes, owls, meadow pipits and lapwings.


Access: The park is open 24 hours a day and the access and car parking are both free. The two main access points are from Skegby Road, Huthwaite (signposted from Sutton Road -- B6026) and from Brand Lane, Stanton Hill. Both of these entrances have car parking space. There are also several other pedestrian entrances especially from the Sutton-in-Ashfield direction.

History: The park has been laid out over the yard and spoil heaps of the former Brierley Colliery, which closed in the early 1990s. It was called Brierley Colliery because many of the miners employed there when the mine was sunk, were from Brierley in the West Midlands. It was opened to the public as a country park in the summer of 1999. It is now a Community Forest and a part of the Greenwood Forest. It is run by Ashfield District Council and has an active friends group.


Facilities: The Visitor Centre is open daily (except Mondays) and has toilet facilities, leaflets and a limited range of refreshments. The Visitor Centre also has full access for disabled people and information on the beautiful routes around the park suitable for wheelchair users is available. Once in the park, access around the western end (where the Visitor Centre is), is easy and many of the paths in this part are wheelchair and pushchair friendly. The eastern end, aptly named Brierley Tops, where the spoil tip used to be, is definitely steep in parts.


Habitat: The park covers some 250 acres (100 hectares). As expected, being an ex-pit site, most of the area is open grassland, especially on the old spoil heap, but there is also "young" woodland, old hedges and created meadows with Cowslips and manufactured wetland, plus the manicured grass of an adjacent golf course. A new pond "Brierley Water" has to some extent replaced the original Brierley Pond which was lost underneath the spoil heap. Many of the newly planted trees are Birch, Oak and Alder. The Golf Course which is on the North side of the Country Park has a public footpath running through it.

Willow Tit are still fairly easy to locate here, usually found around the feeding stations. The hedges on the north side of the country park, near to Stubbing Hill farm also have Willow Tits amongst other species.

Brierley water holds good numbers of Mute Swans and in winter loafing Gulls. The golf course can have migrating Wheatear, pipits and wagtails, and can be scanned from the footpath which intersects it. Stubbing Hill farm itself also has several pasture fields, that are always worth checking out for possible migrants in Spring and Autumn.