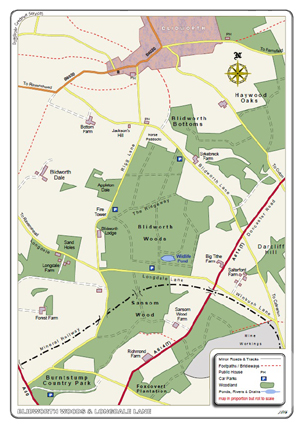 
Access: The woods can be reached by taking the A614, Doncaster Road, North from Nottingham and leaving this road by either Longdale Lane (SK595524), which is nearest to Nottingham, or Blidworth Lane (SK595544), further to the North. Both of these roads run next to the sides of the wood, and both have car parks on them or, alternatively, a third car park is located on Rigg Lane (SK584533), which links these other two lanes. There are walks through the wood marked with posts and several bridle tracks as well as the more substantial service roads for logging operations. These latter routes may be used once or twice a year for motor rallying.


Habitat: Mainly plantations of conifers and some native hardwoods, including Sitka Spruce, Norway Spruce, Scots Pine, Larch, Oak, Birch, Beech and some Sycamore. The trees are a crop and so a patchwork of clear felled right up to mature woodland areas can be found. There is also a small wildlife pond and an attempt has been made to preserve a small area of heath, underneath the electricity pylons. The best paths to follow are those that follow the borders of two differing areas, for instance between tall trees and a clear fell site or where deciduous trees abut against conifers. The fields next to the wood can also be productive, especially looking from the wood's northern border towards Blidworth Lane, across the horse fields.

The wildlife pond is always worth a look as you leave the Blidworth Lane car park, turning right under the power lines. Unfortunately it has received a little bit too much attention recently from people not sympathetic to its purpose and the woodland management has had to fence it off. In late March it writhes with spawning Common Frogs and, as spring progresses, these are joined by Common Toads. Soon the pool edges are black with tadpoles. Preying on these throughout the summer are Smooth Newts, Great Water Beetles and dragonfly nymphs. Broad-bodied Chasers are regularly seen over the pool in ones or twos, but they are far outnumbered by the Common Blue Damselflies, and Whirligig Beetles carve out their erratic patterns on the water surface. On hot summer days the pond can be productive for small birds coming to drink and bathe. Other insects not infrequently met with are Brown Hawkers and Common Darters and occasionally Southern Hawker. Along the sandier rides Green Tiger Beetles are abundant and can be seen running and flying about as they seek their living. Also worth looking for here are the burrows of Red-bearded Fan Wasps and these can sometimes be seen carrying a hapless caterpillar with which to stock their breeding chamber.


Birds: In Winter the main subjects of interest are the roving tit flocks, bunting and finch roosts and thrush roost. The tit flocks may include all the common tits except Marsh Tits, with many Goldcrests and a few Tree-creepers. The bunting roost consists mainly of Yellowhammers, with occasional Corn Bunting, Brambling, Chaffinch, Siskin and Redpoll, depending on their abundance in the county at the time. The thrush roost is made up mostly of Mistle Thrushes, with Fieldfares and Redwings when they are about. In Crossbill years the mature pines have attracted small flocks and winter flocks of small passerines can attract raptors, which might include Merlin.

Spring: the wood is a cacophony of Willow Warbler and Chiffchaff song. Other common breeding warblers are Garden Warbler and Blackcap with rather fewer Whitethroat and very occasional Grasshopper Warbler. The woodland edges are sometimes good for migrants, with Whinchat, Redstart, Wheatear and Wood Warbler all possible.

Summer - the breeding birds include Nightjar, Woodcock, Cuckoo, several pairs of Tree Pipits and, once, a pair of Hawflnches. Hobbies frequently harass the hirundines over the wood and at least three pairs of Tawny Owls may be breeding and occasionally a pair of Long-eared Owls. A very pleasant evening can be had watching and listening for Nightjars (of which there are several pairs), roding Woodcocks and discovering the whereabouts of the owls.

Autumn - passage birds are again worth looking for, with Stonechat, Redstart and Pied Flycatcher having turned up in the past. Sometimes Pink-footed Goose and Golden Plover overfly the woods, as do all five common species of gull and occasional ducks and swans.


Mammals: These are obviously less frequently seen than the birds, but evidence of their presence is not hard to find. Grey Squirrels are, predictably, very common as the litter of shredded pine cones makes obvious, and Rabbits give many a dog some good exercise. Hares are not so common but, nevertheless, frequently seen and so are Short-tailed and Bank Voles and Wood Mice (often the unfortunate victim of a Kestrel). All of these rodents and lagomorphs attract their predators and Stoat and Weasel can be seen by the lucky few, as can the Fox, which announces its presence more often by its smell. The insectivores are represented by Hedgehogs, which are commonly heard snuffling through the undergrowth during Nightjar watches and Moles that leave a far more obvious trace with their mounds of freshly turned earth. Shrews are much harder to find, although they can sometimes be heard screaming at each other from beneath a tussock of grass. In late, dry, summers Common Shrew corpses are sometimes found lying on the woodland paths. Bats are another summer evening attraction and Pippistrelle, Whiskered and Long-eared bats may dive over your head as you follow a woodland trail.


Butterflies: vary with the time of summer but during the year several species can be seen, starting with Brimstone in spring, followed shortly by Peacock, Small Tortoiseshell and Comma. A little later on Small Skippers appear and then Large Skipper, Small Copper (which can be abundant) and Common Blue. Large, Small and Green-veined White are all regular, as are Meadow Brown and Gatekeeper. Later in the summer Red Admirals can be seen patrolling certain rides. Some of the drier, sandy areas are particularly popular with the butterflies that take nectar from the heather that grows there. Another predator on the insects in these patches is the Common Lizard that, with luck, can be seen sunning itself, often on a fallen log or branch where it protrudes from under the grass or brambles and is in full sun and protected from the breeze.

At the sides of many of the logging roads Ragwort grows in profusion and if looked over Cinnabar Moth caterpillars may be found, wreaking havoc with the foliage and often eating entire plants. Other common plants in these areas are Centaury, Perforated St. John's Wort and tiny Field Pansies. Less common but found in several suitable places are Harebells, Sheep's Bit Scabious and Bugloss.