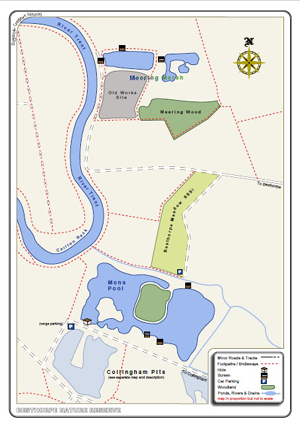 
Besthorpe Nature Reserve is divided into two distinct parts; Mons Pool (including Besthorpe Meadow), which abuts Collingham Pits to the south, and Meering Marsh which lies slightly to the north. Both are managed by Nottinghamshire Wildlife Trust, and were been subject to habitat creation and enhancement works during 2011.

Mons Pool can be accessed from two directions; either from the south through Collingham Pits, by taking the track down the western side of the Silt Lagoon and parking next to the gate (there is then a footpath up the western side of Mons Pool, and a hide); or from the north, via Besthorpe Village, by taking Trent Lane at the southern end of the village. From this direction, the entrance to the reserve is down a track on the left that passes along the edge of Besthorpe Meadow (a SSSI).


The site consists of two open water areas to the east and west, with a large central island. This island, with mature ash trees and hawthorn scrub, is well known for its breeding Cormorants and Grey Herons, whilst Little Egrets colonised recently. There is a second (and since 2011, much smaller) island on the western part of the site, which briefly held a strong Sand Martin colony, although the bank has subsequently collapsed. There is also a block of reedbed on the eastern part of the site that was established a few years ago.

Prior to the 2011 works, there was very limited marginal habitat at the site, but the importation of spoil from Meering Marsh and the reprofiling of the western island has resulted in the creation of shallows and low islands (most extensively on the western part of the site, but also with an area next to the existing reedbed). Almost as soon as the reprofiling works were done, they proved attractive to passage waders, pulling in good numbers of Greenshank, several Bar-tailed Godwits (in what was a particularly good year for overland passage of this species), and briefly hosting 4 Temminck's Stints before they relocated to Collingham Pits. The site continues to attract waders in Spring and Autumn, including Wood Sandpiper, Ruff and Black-tailed Godwit. It also seems particularly attractive to Gadwall, and in Spring and Autumn the Teal are always worth checking for a Garganey. Smew sometimes occur, as do Goosander. Reed Warblers breed in small numbers, and this is still a good location for Turtle Dove and Hobby. Other breeding birds include Coot, Great Crested Grebe and Shelduck.

Viewing is possible from a number of places; on the western side of Mons Pool, there is a hide in the south-west corner offering rather restricted views, whilst at the time of writing a new hide is being built on the north side, giving a much better view over the shallows and low islands; good views of these can also be had by walking along the footpath up the western boundary of Mons Pool. On the eastern side of the site, there are three viewing screens, one to the north near the carpark, and two to the south in what is called Parish Field, accessed off Northcroft Lane, overlooking the reedbed and shallows.

Meering Marsh is also accessed via Besthorpe Village, continuing past the entrance to Mons Pool. Unfortunately, at this point, the road condition deteriorates to a very bumpy and pot-holed track - watch your suspension! On reaching the Trent, the track turns north and after another hundred yards or so the entrance to the reserve is reached. The site is an area of naturally regenerated former sand and gravel quarrying (and was the works site), with short rabbit-cropped grassland, areas of bare gravel, shallow pools, and willow scrub. The western part of the site, which was an area of old silt ponds, had become dense willow scrub and dry reedbed, but the 2011 works cleared, excavated and reprofiled this area with the aim of creating a reedbed and area of wet grassland, and a viewing screen was installed on its western side.


At the same time, the old "E.On Lagoon" in the north-west corner was preprofiled and linked to the Trent via a pipe. This now serves as a water storage lagoon, to be used for topping up water levels in the new reedbed (which has been very slow to establish), and is overlooked by screens on its western and northern banks.

Bird-wise, this site rarely produces much of great note, but is very under-watched – but by the same token, is a lovely quiet site. However, the E.On Lagoon has produced Pectoral Sandpiper and Glossy Ibis (2013 and 2016 respectively), and the short grassland has produced several Ring Ouzels and Wheatear on passage. However, the real highlight is breeding Turtle Dove, which still occur here. Whilst in the area, it is also worth checking the River Trent (this is often a good spot for Goosander in the winter), and the large open fields to the north looking towards Smithy Marsh - Yellow Wagtail breed in this area in the summer, whilst in the winter it can be a good spot for Merlin, and Bewick's Swan and Eurasian White-fronted Geese have turned up here recently.


An area of secondary woodland (now named Meering Wood), accessed via the footpath which runs along the southern boundary of the site, provides additional habitat diversity, and is good for warblers in the summer, and for Bullfinch year-round. Pied Flycatcher and Redstart have also occurred here on passage.