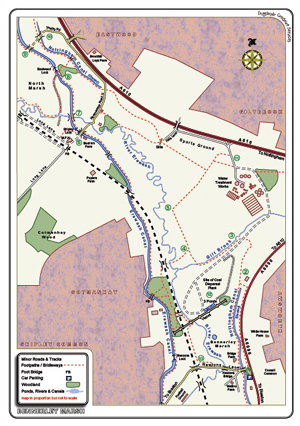 
Access: From Ikea on the A 610 take the Awsworth bypass (A6096) signposted to Ilkeston, after about a mile turn right into Newtons Lane and immediately left into the car park for the Nottingham Canal Local Nature Reserve. The site is also accessible by bus either from Ilkeston town centre or any bus which stops near Ilkeston Town Football Club.


Habitat: Bennerley Marsh lies in the valley of the River Erewash and is almost completely surrounded by built up areas - nevertheless The valley is on a major bird migration route - while also containing wide-ranging habitats for many species of flora and fauna.

The diverse nature of the site is part of its wildlife attraction. The central feature is the River Erewash which flows through from north to south. The river frequently breaches its banks, providing excellent habitat for birds such as Teal, Snipe and Golden Plover. The site is also comprised of a canal, disused railway banks and small plantations.


1) From the car park cross Newtons Lane and walk along the footpath with the disused Nottingham Canal on your right. After around 150m stop at the gap in the hedge and look down onto Bennerley Marsh. During winter this is a good site for Golden Plover and Lapwing along with Wigeon and Teal, Common Snipe and Common Redshank are also regular. Winter gulls will Include Black-headed, Common and LBB Gulls. While in spring and summer you can expect to see Little Ringed Plover, Ringed Plover and Greenshank. Grey Heron and Kestrel are seen daily around the Viaduct. Little Egret Has also became a regular visitor of late.

2) Follow the canal until you reach a small copse where Green Woodpecker and Great Spotted Woodpecker can be seen. While in summer it's a good place for migrants including Chiffchaff, Willow Warbler, Blackcap and Willow Tit if you are very lucky.

3) Cross the concrete road and turn left along the bridle path with the Giltbrook on your right, where Kingfisher is a regular Visitor. The trees along the brook hold Whitethroat and Lesser Whitethroat during summer and the occasional Spotted Flycatcher in the autumn.

Follow the path and then turn right over the footbridge and stop where the path branches off to the left during winter this is a good area for Stonechat, while during spring you will hear and maybe see Grasshopper Warbler, Sedge Warbler and Read Bunting are common as are Skylark. Following the footpath northward, the hedge on your right will hold Reed Bunting, Goldcrest and sometimes Yellowhammer.

6) Barn Swallows breed in the working stables on your left, you will also see House Martin, Sand Martin and Swift, Common Tern use the canal as do Tufted Duck and Little Grebe.

7) Turn right and walk up along the canal, as you cross the Aquaduct over the river Erewash look out for both Grey Wagtail and Kingfisher, while the trees hold summer migrants or Siskin and Redpoll in winter. Woodpeckers can be seen here at any time of the year.

8) Carry on until you reach Eastwood Lock, follow the path over the canal and directly in front of you is North Marsh where you can expect to see Kestrel, Sparrowhawk and Buzzard - (if you have the time walk across the field until you reach the marsh, winter is the best time for Water Rail, Common Snipe and Jack Snipe).

9) Walk the short distance along the towpath until you reach the next bridge on your right, this is a good area for both species of Whitethroat.

10) Cross the bridge and follow the track until you reach the next footpath on your right, which runs along the disused Nottingham Canal, Mistle and Song Thrush are seen here - when you reach the " white swing bridge " pause a while on the seat and listen for Willow Tit! Continue walking alongside the canal on reaching the tarmac road cross over and carry on along the marked footpath until you reach the main bridle track and turn left - walk passed the football pitch on your left until you reach a Concrete road.

11) Turn right and follow this road until you reach Newthorpe Water Treatment Works, turn left and continue to follow the concrete road, during winter this site is always full of Corvids and good numbers of Pied Wagtail along with a pair of Grey Wagtail, while Summer brings '100s ' of Swifts, Swallows, House and Sand Martins.

13) Retrace your steps and walk under the Viaduct where Barn Owls once bred, on reaching the end of the path stop at the 5 bared gate on your left and look over Bennerley Marsh, follow the footpath until you rejoin the main road, as you cross over the River Erewash lookout for Sand Martin, they breed most years under the bridge - and a pair of Kingfishers are regularly seen here, carry on walking up the hill to the car park where you started.


Birds: This site regularly holds large wintering flocks of Golden Plover, which can number a couple of thousand birds. Reasonalble numbers of ducks such as Teal and Wigeon occur here in winter on the pools. Passage waders can occure in small numbers in spring and autumn as they pass through with Little ringed Plover and Common Redshank being the most likely. Willow Tits used to be common along the path which leads from the Erewash canal under the railway bridge and alongside the old coal plant. They are still present but nowhere near as common. Winter Thrushes are plentiful in the horse pastures and maybe around the sewage works. Skylarks and Pipits nest in the surrounding fields. Rarities recorded include Sabines Gull (1994), Grey Phalarope (1997) and American Wigeon (2002).


Other Wildlife: 22 species of butterfly and 15 species of dragonfly recorded. Of particular note in 1995 was the July record of Silver-washed Fritillary, the first in Nottinghamshire since 1917.