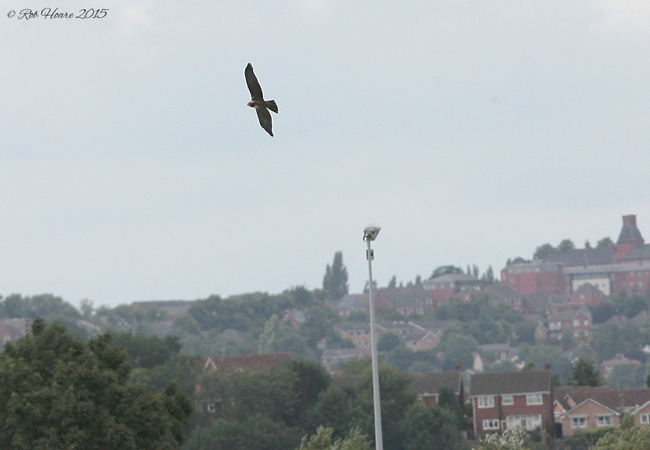 A pair of rare birds of prey have successfully raised at least one chick at a nature reserve in Gedling described as the "jewel in the crown" of nature in the borough.

The marsh harrier was only found to be nesting in the county in 2010, and the rare bird has only bred a handful of times in Nottinghamshire since then.

It's included on the 'amber list' which means it is endangered but beginning to recover and there are 300 or less breeding pairs in the UK.

The pair of birds have raised at least one chick at Netherfield Lagoons according to the Gedling Conservation Trust, who own and manage the local nature reserve. Pete Smith, site manager at the lagoons, said: "The march harriers were down to one breeding pair in 1971, and were only first seen to be breeding in Nottingham in 2009.

"The natural marshland is their preferred habitat, and I've put a few bushes in for them to perch on.

"They will have travelled from North Africa or Spain, and will then migrate back for the winter. "Hopefully they will come back again next year."

The RSPB estimates that less than 400 pairs of marsh harriers breed in the UK each year. Mark Glover, chairman of Gedling Conservation Trust, said: "We are thrilled that this rare and very impressive bird of prey has succeeded in raising at least one offspring this year at our site.

"Along with some amazing volunteers, we have worked so hard to preserve this fantastic area for wildlife.

"It is the jewel in the crown for nature in Gedling and plays host to hundreds of species of birds, mammals, insects and plants."

The nature reserve covers an area of 50 hectares and contains one of the most important reedbeds in the county – a habitat preferred by marsh harriers.

"It's great that a threatened species has a new breeding site and, coming soon after news of the county's first breeding success for bitterns, it highlights the importance of reed bed habitats along the Trent Valley.

"The hard work done by many organisations including the Gedling Conservation Trust to create and restore habitat alongside the Trent is now really benefitting wildlife and giving local naturalists great opportunities to enjoy wildlife they would once have had to travel to see, right on their doorstep.