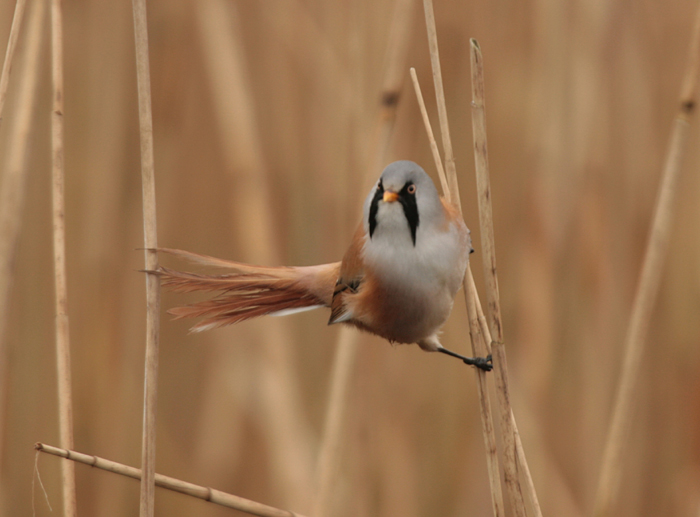 The habitats at Langford Lowfields are developing nicely and over the years we have seen many successes such as our first breeding Marsh Harriers in 2010, a pair of Bittern in 2011 (with resident birds ever since) and the first confirmed juvenile Cetti’s Warblers this year.

However one of the most important milestones in the sites history came as a bit of a surprise to us back in the spring... It all started back in October 2015 when a flock of six Bearded Tits were record-ed from Phase 2. These were the first beardies on site since Jan-uary 2012 and were very welcome indeed after so many years without them. They stayed all winter, with several observers being treated to good views across a wide area of the site.

In April, two birds were still present and thoughts turned to the possibility of them breeding, but from the last week of the month sightings stopped and it was as-sumed the birds had departed. This was short lived however, when in mid-May, feed-ing flights were noted over the northern-most silt lagoon. Observations strongly sug-gested that the adults were feeding young, with regular flights to the same spot in the reedbed and we were able to confirm our first Bearded Tit breeding attempt!

After around 10 days of feeding flights, everything went quiet – the attempt had either failed, or young had left the nest. Several weeks went by with no sightings at all until August when local birders Mark Dawson and Carl Cornish (also our Conservation Officer) recorded juveniles a few days apart, on the silt lagoons. Two individuals were seen, one with a noticeable shorter tail than the other, suggesting it may be from a much later brood (or had lost the original tail traumatically and was growing it back!). Not only had the birds made their first breeding attempt at Langford, it had been suc-cessful.

We have had numerous other sightings throughout September and October from across the site, including from the floating bridge and viewing screen, with a maximum of nine birds recorded so far.

If you are birding on site and see them, please do let us know on 01636 893611, we are very keen to keep an eye on them and have our fingers crossed for next year!