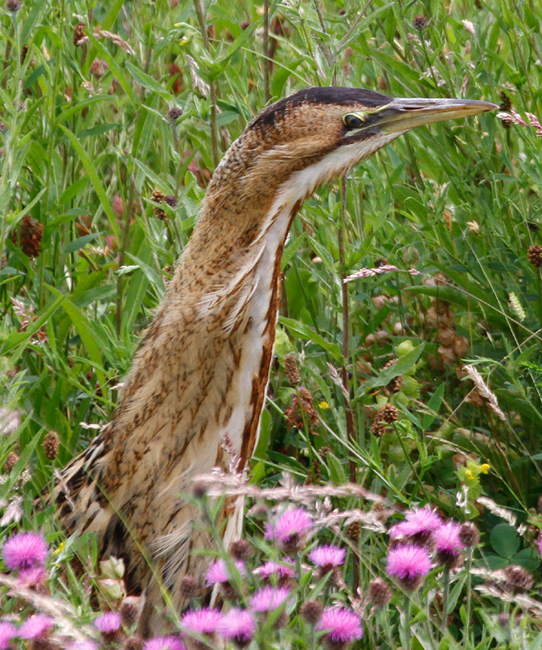 Nottinghamshire Wildlife Trust, the county’s largest locally based conservation charity, has today spoken of its delight that bitterns, a bird species of conservation concern across Europe, have bred at its Attenborough Nature Reserve, with two healthy chicks being regularly spotted at the popular site.

The Wildlife Trust understands this to be the first recorded breeding success for the species in the county and is excited that conservation effort stretching back over 15 years has finally come to fruition.

Speaking about the breeding success Sandy Aitken, who has been a volunteer at the reserve for over 30 years said: “The news that bitterns have bred at Attenborough is fantastic. Fifteen years ago I worked alongside Wildlife Trust staff to design and plant the reedbeds where the birds have nested. The project was very ambitious and involved bulldozing hundreds of tons of material into a deep lake and creating areas where young reed seedlings could become established.

The bittern, which has not bred in Nottinghamshire in modern times, is of international conservation concern and has been an important “Flagship species” for this restoration of reed swamp vegetation all over Europe, so to see two little fledgling bitterns poking their heads skywards through the reeds, (waiting for mum to arrive with food) last weekend here on our doorstep at Attenborough, has been especially gratifying for the many local people who have volunteered here, especially those involved in efforts to maintain the reedbeds!”

The Wildlife Trust has long hoped that bittern would one day breed at the reserve after its reedbeds became a regular wintering area for the species – with as many as seven individuals recorded on site at once. When a male was heard making its ‘booming’ mating call late into the spring, efforts were made to give the birds every chance of success by raising the water levels within the reedbed to help ensure adequate supplies of fish for the birds - and to provide additional protection from land based predators such as foxes.

Mr Aitken continued: “The reedbeds still need management today with removal of fast growing willow saplings being the main task. In recent years this has been undertaken by Reserve Manager Graham Bowden and his team with the support of many volunteers. The restoration and re-creation of reedbeds has many advantages for us all because they help to cleanse polluted waters, as well as providing habitats for a whole vast range of aquatic and marshland species.

Speaking on behalf of CEMEX, the site owners Community Affairs Manager Ian Southcott, '"This is fantastic news for Attenborough and testament to the hard work and dedication of the Nottinghamshire Wildlife Trust staff and volunteers- we wish the parents and chicks all the very best!'"

“I am very excited to learn about the Bitterns and their chicks at Attenborough Nature Reserve. The site is a jewel in the Borough’s crown and we are delighted to be associated with the conservations work being done there which has provided the wonderfully wildlife-rich site that it is today. As well as being a haven for wildlife, the site is very popular with visitors, many of whom come to enjoy the wildlife or simply to relax in the peaceful surroundings and we hope to see the bitterns return year after year just like the visitor.”

Speaking on behalf of Nottinghamshire Wildlife Trust, Head of Conservation Janice Bradley said: “For many years, bitterns have been seen regularly in winter in our two largest reedbed areas in Clifton Pond and the Delta, but we have always assumed these to be visitors escaping cold conditions from further east. However a male 'boomed' for a couple of weeks in spring last year and a male was also present this year for over two months so we decided to raise the water levels around the reedbed to give them every chance of success. I am delighted that the work of so many staff and volunteers over five decades – to first protect the site from in filling after quarrying and then to develop and manage it as a nature reserve has resulted in this fantastic news.”

Although the Wildlife Trust knew of the presence of a male, no evidence of nesting had been observed. Whilst male and female bitterns are virtually identical, high quality photos provided by local birders helped to prove that a second bird was also present. The chicks were first observed just over a week ago and the announcement of the breeding success was delayed until the charity was convinced that the birds were old enough to be unlikely to be disturbed. The Wildlife Trust is asking visitors wishing the view the birds to use the tower hide over-looking the reedbed, to keep noise to a minimum and to be considerate of others wishing to the view the birds.

The population of bittern in the UK reached a worrying low in the late 1990’s – in 1997 just 11 booming males were recorded – down from 80 in the early 1950s. Thanks to a concerted conservation effort numbers have risen and today it is estimated that there are once again 80 booming males again and 600 birds in total in the UK. Nottinghamshire Wildlife Trust hopes that efforts to restore former sand and gravel workings alongside the River Trent by Wildlife Trusts and other conservation groups will see the Trent Valley become a stronghold for the species in the future.